This graphic illustrates the concept of "One Earth" lifestyle and economy.  The assumption is, the average middle class person in the US and the affluent of much of the world are consuming far too many resources and creating far too much pollution for planet earth to both sustain the clean up.

The graphic is a concept, it is not an equation.  But its a decent guess at how far from sustainable we are with our affluent lives.  According to the "Footprint Calculator" [ www.footprintcalculator.org ] for everyone in the world to live like the average American would require 5 planet earths to supply the resources and clean up/disperse the waste.

The circles compare our current 5 earth national wealth with the wealth generated by a sustainable one earth economy.

The graphic also shows wealth distribution.  Many people would, for good reasons, like to see wealth much more evenly distributed.  The income groups that would take a big hit would not only be the proverbial 1%.  The graphic suggests [again this is not an equation, just a good guess concept] even average middle class people in the US and the world would have to downsize greatly.  Compare the upper 20% now and the size of their share in the one earth future.  That is not a scenario many people are going to embrace.

The take home message with the graphic is, a sustainable lifestyle, economy and society will have to be greatly downsized to be sustainable.  Would that mean 1/5th what we have now?  Or 1/2 or 1/10th?  That is hard to say but its certain the planet is suffering badly right now with "only" a billion or so people living like the average American. [A billion is a guess]

Any contraction in our economy would have extensive consequences in every conceivable way, given that market capitalism requires growth.  Our society could no longer afford much of what we currently take for granted such as suburbia, highway infrastructure and cars.  At the individual/family/mutual assistance group level, best to downsize sooner than later.  The more people prepared for a much lower budget future, the better.  If you are an average American, imagine your income 1/5th what you have now and a gallon of gasoline costing $15. 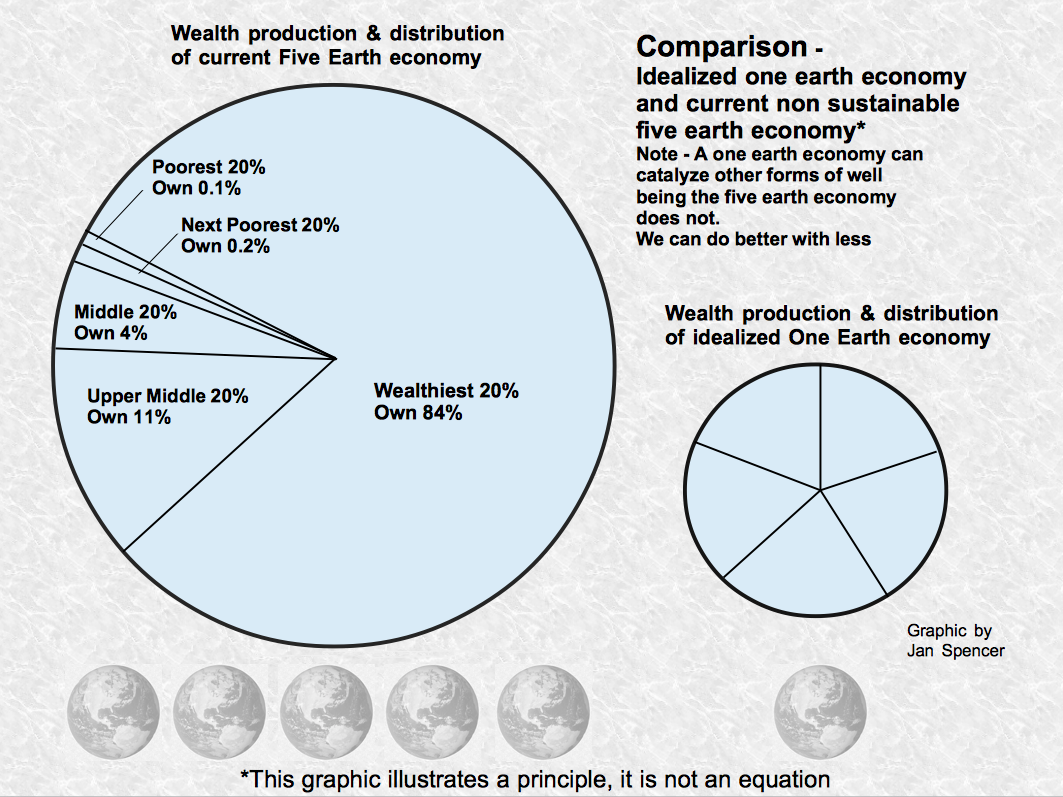