One of my first priorities was to convert the single car size car port into a living space. Reasons were to make this a three bedroom house to increase the residential density a bit. Plus, the driveway had to go [later] so the space could serve a much greater purpose providing shelter for me rather than a car.

Suburbia is proving to be an unfortunate choice in land use. Sprawl and dependence on the automobile demand a heavy price on the environment, on our social structure, economy, foreign policy and quality of life. Visit the section on History of Suburbia for more. Re inventing the suburban landscape is the best we can do with what is already built. That means infill to increase residential density so public transit becomes more viable. Also, increased density protects open space and encourages neighborhood scale economic development that can enhance a neighborhood's well being by creating jobs closer to where people live and to provide services more accessible without having to use a car so much. There are many benefits to re inventing suburbia. My small project here is one part of that re invention. Not everyone cares to turn their entire yard into agriculture and habitat but by and by, more people will and others will be glad to have someone else re invent their yard and maintain it, much like having a lawn mowing clientele.

I hired a professional friend and helped him. Nothing major but was great to help make the transition. The open end was closed, spidery dark, dusty closet at the south end was opened up as we cut through the 12 foot wide south wall to install an 8 foot sliding glass door. Wow! The siding of the house is immaculate redwood.. We re framed the west wall for new window arrangement, insulated walls, floor, ceiling. Recycled double pane windows all came from Bring Recycling.

The re model is an excellent example of making better use of an existing space. I have a 12 x 25 indoor space now for office/bedroom/studio. It is very light and the solar gain is appreciable even in the winter time. I use aluminum sandwich bubble sheets placed over all windows [available at Jerry's R 13] for nightie insulation for the winter time. Its a great space looking out to the back yard with nearly all of the south wall glass and much of the west wall glass. There is a door into the kitchen. View out one of the north windows where I paint is to the front yard pool and habitat. Its fun to create! 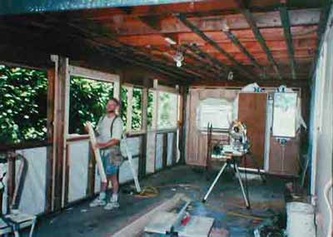 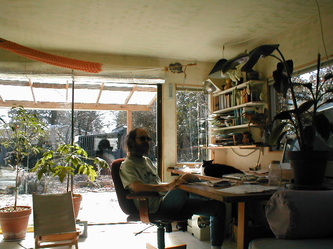 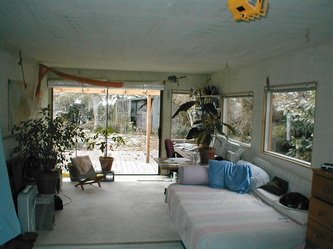 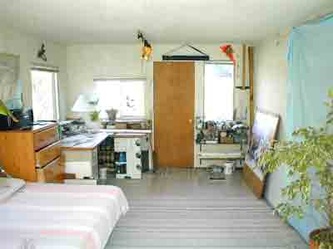 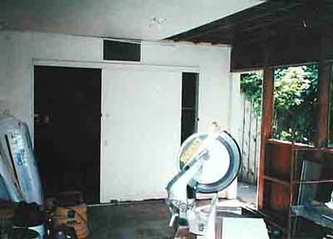